The current high score over on Twin Galaxies on MAME for this is 2,116,910 by Kane Mawhinney which is quite some going considering the low scoring nature.  Although I suspect the points per enemies ramps up as you progress.  So without further ado, lets kills some stuff and destroy a scientist’s lab while we’re at it.  I’m going in!

25,430 – First attempt and the first screen is made up of multiple moving platforms that you have to traverse from left to right to collect a V (why a V I have no idea) to finish the level.  The platforms are attached to a series of pipes which connect from a glass flask bubbling away atop a bunsen burner, funnelling red, mostly evil, liquid to a tank full of the stuff in the bottom right hand corner of the screen.  Every few seconds what I consider to be an egg, or a piece of cheese rolls into the tank, is transformed by the evil red liquid, possibly cherryade, into a frantic eyed reptile of some kind.  Complete with boxing gloves… 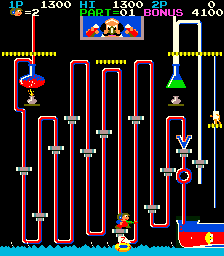 They’ll head across the platforms towards you, launching their boxing gloves in the vain attempt to do you considerable death based damage.  You come armed with a gun which aids in talking them down.  Drop the V on them however and you get a nice 1000 bonus.  Also, a test tube with legs (?) makes its way to the top of the screen where the evil mustached Dr. Micro awaits, ready to fill him up with evil red liquid so it can pour it upon your cherubic bonce and thereby death-ing the hell out of you.  Should you take a wrong step from one of the moving platforms, fear not as at the bottom there awaits a saviour in the shape of an inflatable dinghy ready to bounce you back up to the platform from whence you came, allowing you to carry on the fight to stop Dr. Micro doing something evil I assume.  Can’t quite work it out to be honest.

31,850 – So, on to the second screen we go.  Once again the nasty blinder Dr. Micro hovers atop dispensing his cheap Aldi shiraz to hurt and maim the toddler. On the right hand side of the screen there is an open pipe which dispenses floating balloon enemies, with boxing gloves, again… There is a pipe on the left hand side of the screen which momentarily creates a green bubble or is it a ball? Yet when you jump on it you begin to float so perhaps it’s a balloon? Or an over inflated beach ball? Either way you’re transported up up and away on a beautiful, a beautiful, ballooooon ball thing from whereupon you can take pot shots at the evil red boxing glove balloons. But beware as every shot you take, your flotation device loses air, and after five you fall either to the floor or onto other green ball balloon things. Every now and again a random penguin appears which will give you a bonus of 3000 so it’s key that these are picked up.  All this occurs whilst being buffeted about by fans at either side of the screen.  You can’t fault the developers for introducing some element of physics into the game but it really is all a bit shonky and a tad uncontrollable.  On the plus side, you’re not maimed when you come into contact with the fans.  After you kill enough of the red enemies a vent opens up at the top of the screen. If you reach it before it closes you are taken forward to screen three.  Catch yourself on the back foot, it closes and you have to kill the red guys again until it opens up once more.

On the third screen, the nasty fuzzy faced lab rat has progressed from chemistry lab surrounding to a factory production line setting reminiscent of BBC’s 80s kids program Bertha.  Four floors of oncoming bits and bobs of moving machinery with the the odd bits of conveyer belts.  The objective here is to reach the fourth floor where Dr. Micro is sat.  I don’t.  I mistime many jumps and squander my remaining lives…

84,790 – Aha.  I manage to reach and conquer the fourth floor on the third screen, successfully destroying the patrolling robots and the toddler angrily throws his gun away and gets all up in Dr. Micro’s grill and gives him a swift kick.  However, he quickly runs off and you’re back at screen one.  Oddly, the gun you collect on the third floor must be very heavy as he loses the ability to jump once he collects it.  Having completed the loop, I have no idea what the Dr’s intention is here.  What micro components is he making?  Or is it that he has made the hero microscopic?  Or is the Dr. himself micro? What exactly is he building on that third screen?  It looks to be taking the form of a chair but then it’s melted down into a lump of molten slag then reformed into a shit vase.   It’s baffling.  Perhaps I’m reading too much into this but upon close inspection it’s fair to say it’s batshit crazy.  Oh and I’ve failed to mention the soundtrack is a chip tune version of Chitty Chitty Bang Bang.  Yes. That.  On Loop.  After an hour of that on repeat you’re ready to go postal so do yourself a favour and mute that sucker.

114,550 – Now we’re hitting our stride. Not much changes on the first couple of screens.  The enemies on screen one are somewhat more aggressive and fleet of foot but no more a threat than the previous loop.  The second screen is also the same but with the penguins replaced with water balloons or bubbles or summat.  The third screen swaps the conveyors around a bit and over all three stages the enemies are worth more but that two million Twin Galaxies scores seems a long way off…

334,850 – Reaching screen 12 and by rights I should have progressed further.  A few silly mistakes rushing through the levels contribute to a one way ticket to Deadsville.

…and with that, it’s time up.  Time to submit the scores before the Sunday cutoff. Not a bad score, not as good as @_CharlieFar (of course…) but decent enough to place me at fifth over on Twin Galaxies.  All in all it’s a nadequate platformer but ultimately let down by some weird design choices.  Impressive sprites for its age though.  I’d encourage you to try it out if you’re curious and it does offer a challenge but for me Sanritsu really hit their peak with Bank Panic. So play that instead.